For many athletes, participation in exercise is a healthy pursuit.  Unfortunately, for a significant proportion, exercise can lead to, or exacerbate one or all of the trio of conditions which constitute what is termed the Female Athlete Triad.  This blog looks at the triad, highlights why it should be of concern to female athletes and their coaches, and suggests some interventions to prevent or treat the conditions of the triad.


According to the American College of Sports Medicine (ACSM), the triad is interrelated in aetiology (causes), pathogenesis (symptoms), and consequences.  The triad can result in long-term medical and psychological illness, as well as in short-term declines in physical performance.
Stress fractures, related to declined oestrogen levels, an insufficient diet and subsequently reduced bone mineral density are a major concern for athletes, and anything that increases osteoporosis, a highly debilitating disease which increases with age, is of major concern to society. 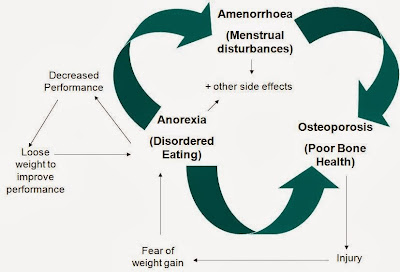 Eating disorders in themselves can lead to severe morbidity, and even death.  Anorexia nervosa and bulimia nervosa are severe psychological illnesses, and require early diagnosis and treatment to limit the long-term effects of the sufferer.  Individuals who develop an eating disorder enter a downward spiral of self-destruction and denial and obsessive behaviour, and the longer it goes untreated, the more difficult it is to break out of the situation.

Anorexia nervosa can be caused by a number of reasons, and suffers will require professional treatment relevant to the source of their illness.  Though clinical eating disorders may not be much more prevalent in sport than in the general population, a range of sub-clinical form of eating issues, known collectively as disordered eating, or anorexia athletic, are extremely prevalent in sports people.  Suffers often intentionally attempt to reduce their weight because they perceive it to be important in their sport, and engage in unhealthy practices to do so.   Disordered eating can lead to menstrual dysfunction, low bone mineral density, impaired performance and a range of other illnesses, and injury risks.

Some warning signs include:
Amenorrhoea and menstrual dysfunction

Amenorrhoea, i.e. prolonged absence of menstrual bleeding, is probably the most recognisable and easily assessed of the three component parts of the triad.  Sports participation, with or without the co-existence of disordered eating, is shown to be higher in female athletes than their sedentary counterparts.  Low body mass, inadequate energy intake and physical and psychological stress and training history are just some of the proposed contributing factors.  Prolonged menstrual dysfunction, and the associated reduction in oestrogen levels, can have prolonged detrimental affects on bone mineral density.

Treatment
Treatment is often difficult, as athletes will likely resist increasing body weight and decreasing training loads.  Athletes also find it difficult to admit to menstrual problems and eating problems, particularly if they have spiraled deep into the circle if self-destruction and denial.  Early diagnosis is important.  Treatment of eating disorders, which should be undertaken by qualified staff, is paramount.

Menstrual disturbance should be medically assessed to ensure that it’s not pathological.  The return of menses, which should occur after a reduction in training volume and a return to a healthy body weight is ideal.  A reduction in training volume of around 10% is recommended, though this does vary from one individual to the next.  Energy intake should be increased gradually.

The contraceptive pill and other hormonal medications are prescribed in many cases, but don’t cure the underlying causes.  Bone mineral density has been shown to increase after the resumption of menses, but bone mineral density may never return to normal levels, even after years of regular menses and hormonal use.

Eating disorders are not exclusive to women, and there is an increasing rate of disordered eating, body
dismorphic disorder and biogrexia among male exercisers. This book highlights some of the issues:

Here are some good general books looking at issues faced by female athletes: