The diet of endurance athletes is likely to consist of large amounts of pasta, rice and breakfast cereal.  Athletes don’t have to stick to these traditional, reliable old carbohydrates though, and can benefit from adding some less well known cereals and carbohydrate-rich foods to their diet.  Those with gluten or wheat intolerance will appreciate the variety, and foods like couscous and polenta are a lot quicker to prepare than rice and pasta.  Here are some of the available options, and what they can contribute to a healthy balanced diet:

Potatoes, unlike cereal based carbohydrates, are a vegetable, and as a result are particularly nutrient dense.  Among the micronutrients which they contain is vitamin C, something which you won’t find in pasta, noodles, or rice.  Cook potatoes in their skins to minimise vitamin C loss during cooking.  There is practically no fat or cholesterol in potatoes, and their skins, if consumed, are a good source of fibre.  Potatoes do have a higher GI than most other starchy foods, and are too often served deep fried (in the form of chips or crisps), or smothered in butter.

Sweet potatoes, like common potatoes, are versatile, and nutrient dense.  They have a lower GI, and unlike white potatoes, they can be mashed and creamed without butter.  They are a good source of fibre, Vitamins A, B6 and C, and Beta-carotene and also contain some protein.  They can be boiled, mashed and roasted, similar to potatoes, and can also be added to curry, risotto and pasta dishes.

Yams, a West African staple, are similar, but not related to sweet potatoes.  The can be cooked in a variety of ways, but traditionally are most often boiled, roasted or fried.  Yams have a lower GI than potatoes, and are a good source of fibre, potassium, manganese, vitamin B6 and vitamin C.

Other vegetables which are high in carbohydrates include cassava, artichokes, sweetcorn, winter squashes, and pumpkin.  Legumes, including peanuts, lentils, peas and beans are also sources of carbohydrate, and as low GI foods, can be added to rice, pasta and potato dishes to lower the overall GI of the dish.

Oats is a great breakfast food for athletes.  Hulled oats is not stripped of its bran or germ, like other processed grains.  In addition to high fibre content, oats has cardio-protective properties, and helps protect against a range of diseases.  Oats is generally served as porridge, though it can also be added to soups and stews, or used as the basis of flapjacks and a range of other sweet treats.

Polenta is a staple food in much of northern Italy.  The word ‘polenta’ literally means ‘cornmeal mush’ and is made from naturally low fat, low cholesterol, high fibre cornmeal ground cornmeal flour.  Polenta can be boiled, fried, baked in breads and cakes, or served alongside stews.  Instant powered polenta is widely available.  To make polenta, simply mix the cornmeal with water, and simmer until it thickens. ‘Wet’ polenta is served hot.  It can taste somewhat bland, but adding Italian cheese, herbs, pesto, or strong flavoured foods can greatly enhance the taste.  Alternatively, polenta can be left to cool, cut into slices and grilled or fried.

I recently discovered polenta, and stuck for time one day, came up with my own special recipe, which takes just 10 minutes to prepare.  It goes something like this:

1. Prepare some instant polenta as per packet instructions (stir some polenta into a saucepan of boiling water; add more until becomes a thick paste, simmer for 2 to 3 minutes).
2. Meanwhile poach two eggs.
3. Chop half a red pepper, grate 1 carrot, chop 1 tomato.  (I’ve chosen these vegetables because they don’t need to be cooked, but you can of course choose any vegetable that doesn’t need to be cooked, or stir-fry some vegetables in a separate pan.)
4. Grate or dice a small amount of cheese.  (A strong-flavoured soft cheese such as feta or blue cheese would help add taste to the bland polenta.)
5. Add the vegetables and cheese to the polenta and stir in with a large spoon of pesto, and some sunflower seeds or chopped walnuts.
6. Serve with the eggs. 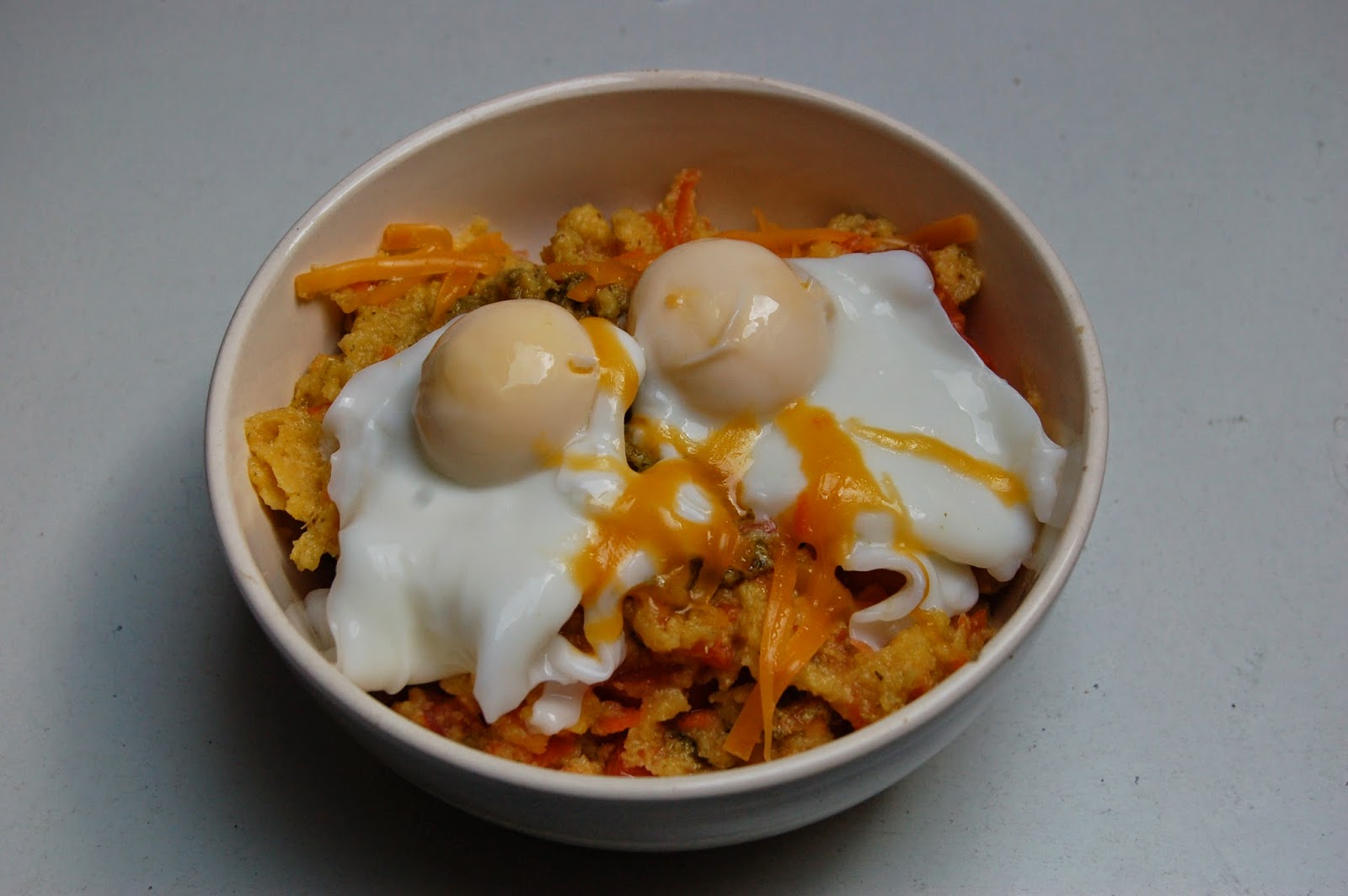 This is a good dish for eating after training as it is quick to prepare, and is high in carbohydrates, protein and vitamins.  You can add some smoked salmon instead of the eggs, and experiment with different nuts and seeds.

Couscous, like pasta, is made from rolled semolina wheat.  It has more protein than rice or potatoes, and with a magical carbohydration:protein ration of 4:1, it is an ideal recovery food.  Quick-cook couscous takes no more than five minutes to prepare, and since it can be made with boiling water in a bowl, it is an ideal food for busy travelling athletes.  Couscous can be served hot or cold, and is an ideal accompaniment to salads.  Add cooked vegetables, smoked salmon and seeds for a great lunchbox meal, or mix in dried fruit, chopped nuts and a tablespoon of yoghurt for a sweet treat.

Quinoa is the edible seeds of a South American grain-like crop.  It has a light, fluffy texture, and a slight bite to it.  It is high in protein as well as carbohydrates.  Quinoa is boiled in water, similar to rice, until the germ and seed separate. Quinoa can be served with nuts, dried fruit, berries and honey for a great high-protein breakfast.

Rice is a calorie-dense, high carbohydrate, low fat crop, and the world’s most popular carbohydrate food.  Rice is also a good source of thiamin, niacin and vitamin E.  Basmati rice has a lower GI than other forms of white rice (the longer the grain, the lower the GI), and brown rice is packed with protein and fibre, and is a good source of B vitamins.  Rice is pretty versatile, and makes a great accompaniment to a range of meals.  Chilli con carne, vegetable and chicken curries and risottos are good carbohydrate-packed meals for athletes.  Risottos are a great way to use up leftovers, and can be made with whatever food is available in the fridge – roast chicken, peas, mushrooms, diced bacon, etc.

Rice noodles take just 3-4 minutes to prepare, have a low GI, and are a good addition to Thai curries and oriental soups.

Noodles are essentially a type of pasta, made with wheat, rice, buckwheat, mungbean or potato flour combined with egg.  Noodles tend to take less time than dried pasta to prepare, and are very versitile, making them a store cupboard favourite.  Choose to boil rather than fry the noodles, and add plenty of vegetables and nuts for a healthy, balanced change to standard pasta and rice.

Bread is a very versatile food, though how healthy it is depends on the type of flour and cooking method used.  More processed flour (e.g. white flour), has a higher GI than wholemeal flour.  Adding nuts and seeds can increase the nutritional content, and reduce the overall GI of the bread.  Rye bread is a particularly low GI option, and is high in soluble fibre.  Making your own bread is a good way to ensure that there are no nasty ingredients and is a lot easier than you would think.

Bulgar wheat has a nice nutty texture and flavour, and a medium-low GI.  It is a good source of fibre, thiamine and vitamin E.  Bulgar wheat, like couscous is as good cold as it is warm, and can be added to salads for a great lunchbox meal.

Buckwheat, despite its name, is no relative to wheat, and is in fact a gluten-free grain.  It is popular in Russian and Eastern European cuisine, and has a strong flavour.  It is high in carbohydrate, protein and fibre, and low in cholesterol and fat.  Buckwheat flour, available in most health food stores, can be combined with wheat flour in pancakes and other wheat-based recipes.

Pearl barley is barley which has had the bran and outer hull removed.  It is low in fat and cholesterol and is a good source of fibre, and is quicker to prepare than other forms of barley.  Pearl barley is often added to stews, and other one-pot dishes.

Amaranth, unlike most other grains, is gluten-free, and suitable for individuals with celiac disease.  It has an excellent balance of carbohydrate, protein and fat, and is packed with both iron and calcium.  It also has a considerably lower GI than pasta.  Amaranth was a staple of the aztect, but its cultivation was banned by the conquistadores.  Today, it is often popped and mixed with honey for a nutritious snack.

Gnocci are small Italian dumplings that are made by binding potato and flour together with egg. Ready-made gnocci take just a few minutes to prepare, and can simply be served with pesto or a tomato-based pasta sauce.

Other staples from around the world include ingera (Ethiopia), a sourdough flatbread made from the iron-rich flour of the teff crop; ugali (Kenya), a dough food made from ground maize, and unsurprisingly, similar to polenta; and plantains, a banana like fruit which can only be eaten cooked, and which is a major staple in Camerron and DR Congo, Central America, the Caribbean, Colombia and Venezuela.

Go Faster Food is a particularly good book for endurance athletes looking to add some variety to their diets.  It includes recipes for a range of pasta, rice and couscous dishes.