Good nutrition is important for all athletes as they endeavor to fuel their sport, optimise their body composition, and remain healthy.  Nutrition is, however, often of greater concern to female athletes than their male counterparts.  Females naturally have a higher body fat percentage than males and can often become obsessed with dieting.  Societal pressure to conform to a certain appearance, irrespective of body type, as well as pressure from coaches and other support staff, can confound body image issues, and may lead to eating disorders.  Female athletes also carry a greater risk of iron-deficiency anemia than their male and sedentary female counterparts, and must ensure they have adequate calcium intake to prevent against stress fractures and osteoporosis.

Calorie Intake
Females have a slightly lower overall calorie requirement than males, due to their lower muscle mass and smaller body size (on average), but have higher demands for iron, and equal requirements for calcium and some other nutrients.  They, therefore, need to ensure that they eat a variety of nutrient dense foods.

Restriction of calories is a common practice among female athletes, particularly in endurance sports and sports such as gymnastics and diving where a lean physique is deemed desirable, but this is not the best approach to maximising performance.  Calorie restriction can directly and indirectly lead to the female athlete triad, and a lack of nutrients can confound the effect that low body fat and low hormone levels have on bone mineral density.  Women, just like men, need to fuel their bodies. 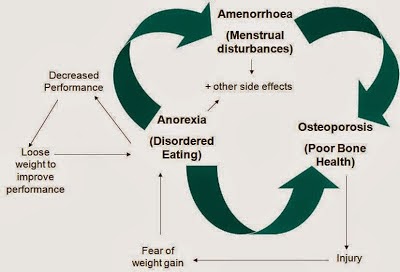 Pregnancy and breastfeeding
Pregnant and lactating females have greater calorie and nutritional requirements, and those considering pregnancy should increase their intake of folic acid in advance of conception.  Those who are planning to exercise while pregnant should seek advice on both exercise and nutrition.

Iron
Iron is a very important mineral for both performance and general health.  Iron is an important component of hemoglobin which is responsible for transporting oxygen around the body.  Low iron levels will quickly result in poor performance in endurance athletes, but can lead to a number of other health and performance issues, including poor recovery, depressed mood states and reduced immune function. More information on the importance of iron can be found here.

Calcium
As mentioned previously, calcium requirements are as high in females as in males, though dairy products (often the best source of calcium), are often restrict in females trying to maintain a low body weight or lean body mass.  We will cover the importance of calcium and how to ensure adequate calcium in the diet in a future post.  However, it is important to stress that vegans, or those who restrict their diary intake, risk getting adequate calcium in their diet.  Low calcium intake, together with low body weight, is a disaster for bones.

Summary
Females should take special care to ensure that all their nutritional demands are being met.  Iron and calcium intake are particularly important, and special care should be taken if the athlete is vegetarian.  In some cases supplements may be required.  Most importantly, all female athletes should develop a positive relationship with food.  Food is not the enemy.
Posted by Eliz2 at 22:05