The Olympic Creed: Living it out in your sporting lives

Amid a backdrop of corruption allegations, selection controversies and doping scandals, the latest edition of 'the greatest show on earth' is fast approaching. When Pierre de Coubertin set up the modern Olympic Games 120 years ago, he could hardly have imagined, firstly, how big the Games would become and, secondly, just how far removed the modern day ethos of the Olympics would appear to be from that he originally envisaged.

The Olympic creed come's from de Coubertin's words spoken at a reception in 1908, words which had been inspired by those of Ethelbert Talbot, Bishop of Pennsylvania.

No matter how commercialised the games have become, or how much the desire to win at all costs removes us from de Coubertin's original vision, it is important to regularly remind ourselves of the creed on which the modern Olympic Games were built, and to ask ourselves whether or not we're doing everything we can to live out that creed in our everyday sporting lives, whether we be a weekend warrior or an Olympic medallist, because, at the end of the day, it doesn't matter whether or not everyone else is living out the Olympic spirit, if, when we reach our 'Olympic' moment, we get that warm fuzzy feeling inside knowing that we have both struggled and fought well, and done so with honour and integrity.

Irish Olympian Ciarán O'Lionaird said it best when he posted the following on his Facebook page earlier this week: 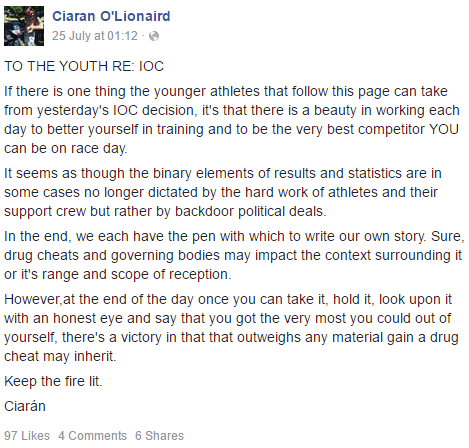 And remembering that the struggle is more important than the triumph doesn't mean that we have to give up on victory, or reduce or sporting goals in any way. Going about achieving success in a way that is true to the Oath may even make us more successful.

Here are some ideas on how we can apply the true Olympic spirit (not the win at all costs one), to our everyday sporting lives. Please feel free to add any further suggestions that you might have as comments below.

1. Don't forget to enjoy the moment, whether that's at a national championship or an Olympic Games. You've earned your place on the start line. This is what you do. Take a moment to take it all in.
2. Whether you win or loose, shake the hands of your fellow competitors. Without them there is no battle to win.
3. Be gracious in defeat, and humble in victory, but don't let that stop you feeling the emotions your win or defeat has created.
4. Play by the rules, and by the spirit of the game.
5. Set goals with are both stretching and realistic. Challenge yourself. Strive towards your goals.
6. Thank your coaches.
7. Encourage others.
Posted by Eliz2 at 15:29